There used to be time where I was oblivious to the information supplied via the nutritional content label, as I shamelessly indulged in pints of Ben & Jerry’s Half Baked. Those days are long gone. About this time, last year, I dropped a few pounds and for the first time ever, I realized that I wasn’t just “big boned” after all. Then came the days of meticulous calorie counting, (admittingly not considering the nutritional content of what I was consuming.)  I went from one extreme to the other. Today, I think I have found a better balance where, although I am still aware (for the most part) of my calorie consumption, I also make sure that I am filling my body with nutrient rich products, regardless of their calorie content. There are few things that I consume that I don’t consciously think of, but hey… a girls gotta live a little too. I admit, I am not above being seduced by the occasional bag of Ruffles (as Bran’s mom would say.)

That being said, I still LOVE my sweets! I don’t have time to bake nearly as often as I used to, but I have found refuge in the “low cal” freezer section of the grocery store. Weight Watchers Dark Chocolate Raspberry Pops, Skinny Cow, and my newly found Arctic Zero that promises a mere 150 PER PINT. (Say whaaa? SOLD!) 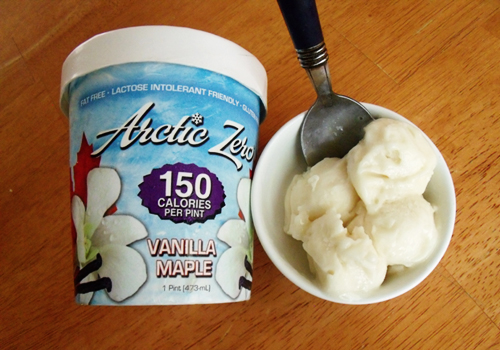 Arctic Zero Maple Vanilla, to be exact, has become my nightly indulgence. Not only does it claim to have only 37 calories per half cup, but it is made with whey protein, and cane sugar (so it doesn’t have any harsh chemical zero calorie sweeteners.) Not to mention, it’s actually pretty darn tasty! (Bran even likes it, and he doesn’t like anything.)

However, much to my dismay, I recently discovered the nutritional label (that I so lovingly cling to) is a fraud! The FDA allows for up to a 20% difference in what is displayed on the label, and what the contents really hold. 20%! (It’s not that I put much credence in the FDA anyway, but that’s a whooooole ‘notha blog post. We’ll just say that I’m a firm believer in “alternative possibilities.”)

So…do these “diet” ice creams purposely mislabel their products, knowing that they can get away with it? Much like McDonald’s has gotten away with its nutritionally bankrupt pink slime?

The link below shows that some of these “skinny” products actually offer fewer calories than the label claims; but my beloved Arctic Zero? This study found that the Maple Vanilla flavor rings it at a whopping 46% MORE calories than the label. Additionally, Chocolate Peanut Butter flavor rang in at 68% more. I was shocked when I heard this news, and it’s interestingly questionable to think that we rely so strongly on these companies that are not strictly regulated and therefore big corporations are basically let loose to govern their own standard of an “honor system.” (The age old tale of Money vs. Morality)

That being said, even being 46% more calories than the label claims, 1 serving of Vanilla Maple Arctic Zero is still only 54 Calories; and the whole pint is still a mere 219. (You’ve redeemed yourself my sweet Arctic friend.)

Check out the following link for further info on the study: