I am so excited to be sharing my Bermuda Travel Guide with you today!! Bermuda was one of my favorite trips, because it was so different than what you might typically expect of a tropical island. Don’t get me wrong, I enjoy laying on the beach just as much as the next gal, but what I really love is exploring, and there was a fair amount of that to do on the island.

Bermuda was colonized by the British in the early 1600’s, so there is a lot of rich history on the island, with a strong British influence. Even the dialect is more of a British influence, with a touch of island flare. 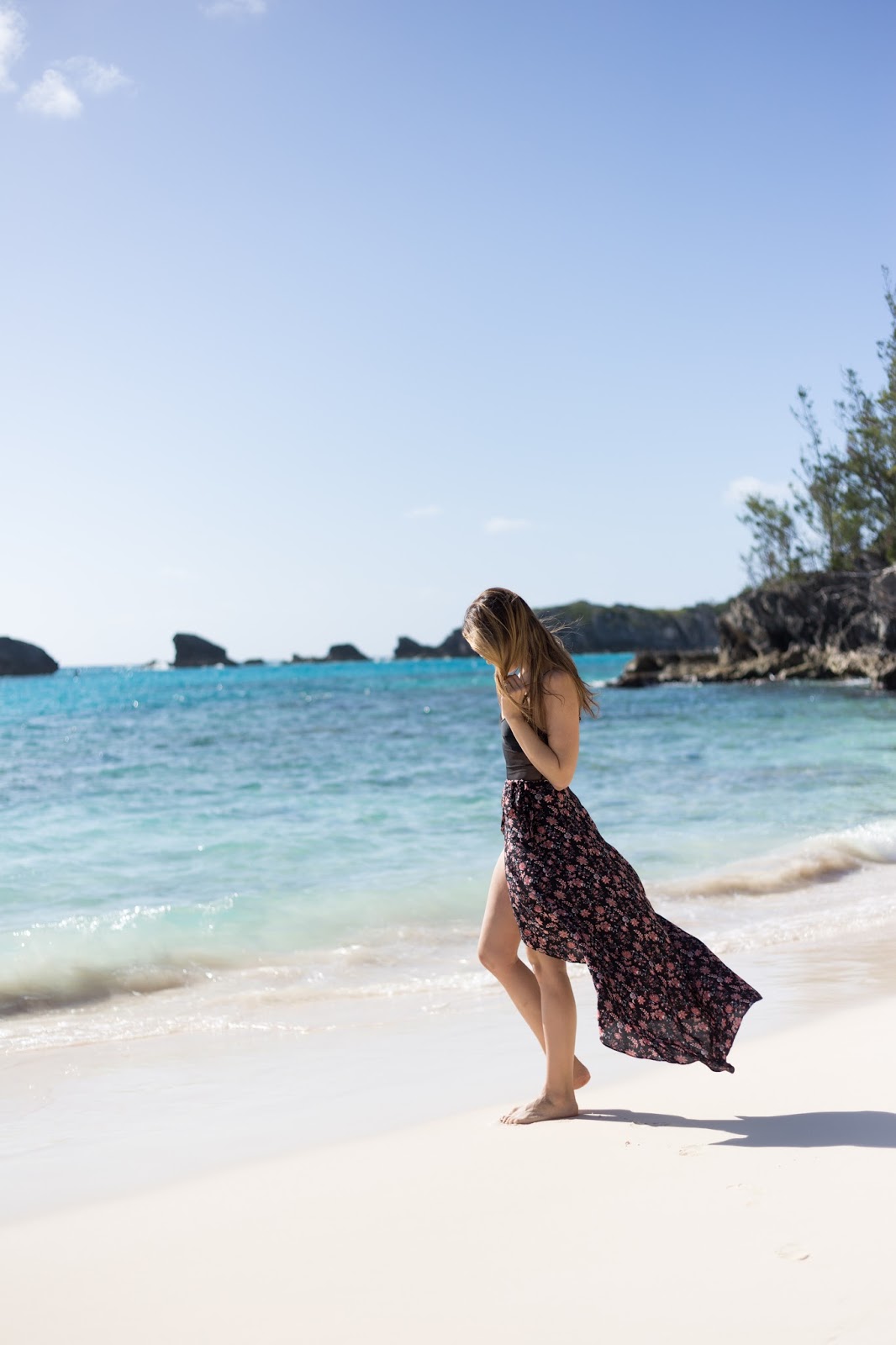 Things you might not expect when you think of Bermuda:

It has four seasons, so it was on the cooler sign around Christmas. We had several days where we were able to lay out on the beach, but a couple of days were definitely on the cooler side, forcing us to wear sweaters. Some people were getting in the water, but those people are crazy. The water is definitely cold.

It doesn’t have Zika. One of the hardest parts about deciding where to go for our Christmas vacation, was the fact that almost all of Mexico and South America poses a certain risk in being infected by the mosquito that carries the Zika virus. This mosquito does not exist in Bermuda, making it a safe place to travel for those who have the same fear. 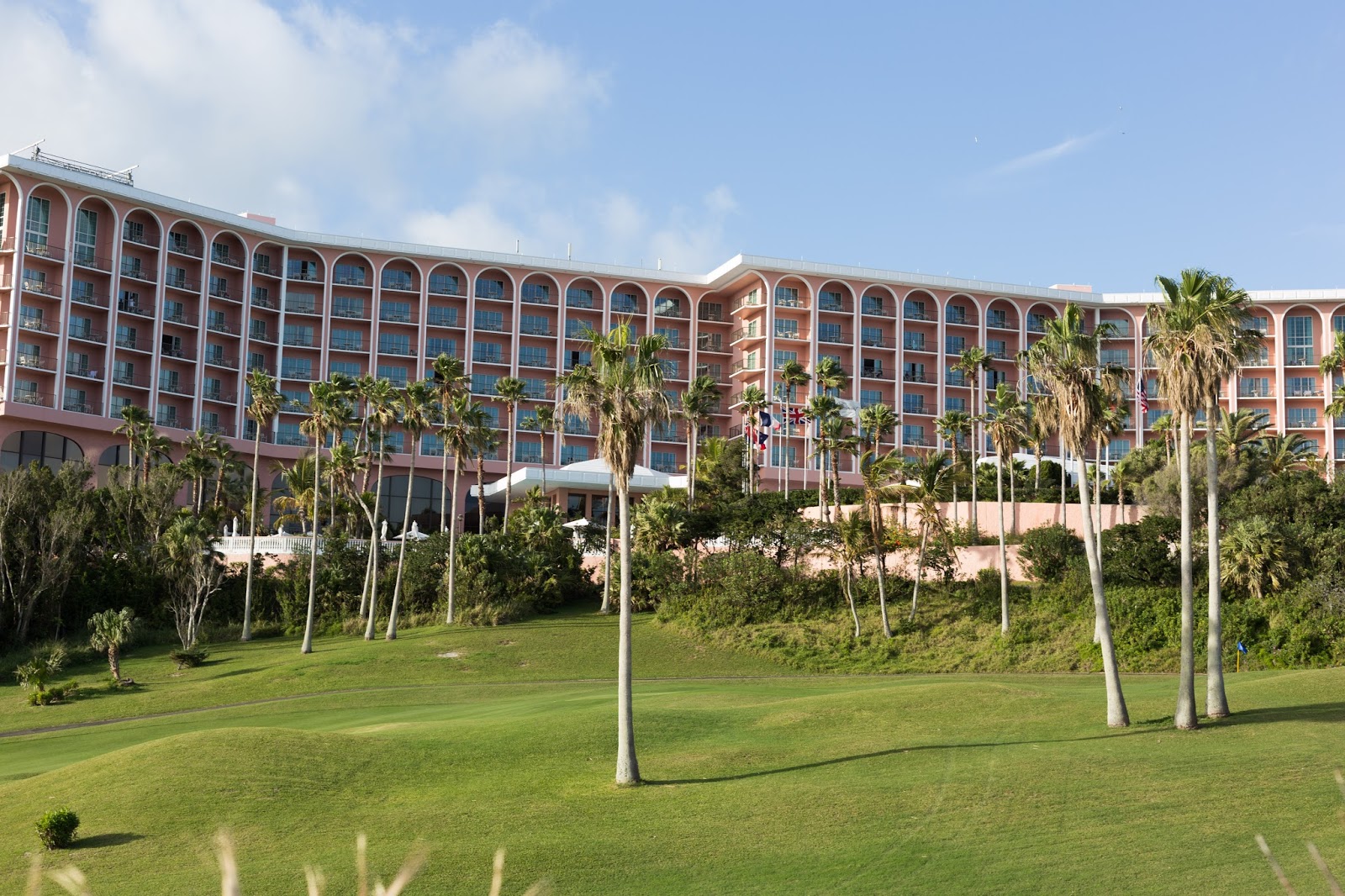 We stayed at the Fairmont Southhampton, which I highly recommend. The resort was clean and well-kept and had a ton of activities like morning yoga, and cooking classes to keep you engaged during down time. We upgraded to the gold plan, which is a little pricier, but well worth the money as it comes with free breakfast every morning, tea time in the afternoon, dessert in the evening and even a two hour long happy hour pre-dinner time – this was especially nice because drinks on the island pretty much cost $15-$20 everywhere you go.

Exploring-wise, there are forts to explore on either side of the island. 14 to be exact. We explored Fort Hamilton and Fort Scaur, which were both beautiful. You can see the whole island from these points.

If you are looking to lay out on the beach, the Fairmont Southhampton has its own beach. Horseshoe Bay is renowned as one of the most beautiful beaches on the island, and it was right next to our resort. You can take a shuttle down to both beaches, but it was a short walk and a nice way to stretch our legs. As for the pink beaches…you’ll read everywhere (and all the locals will tell you) that Bermuda beaches are covered in pink sand, so I totally expected to see rosey hued beaches. That wasn’t the case. Sure, there was a certain tinge of pink here and there, but don’t expect to be blown away by pink sandy beaches. Maybe they are more pink at a different time of the year? 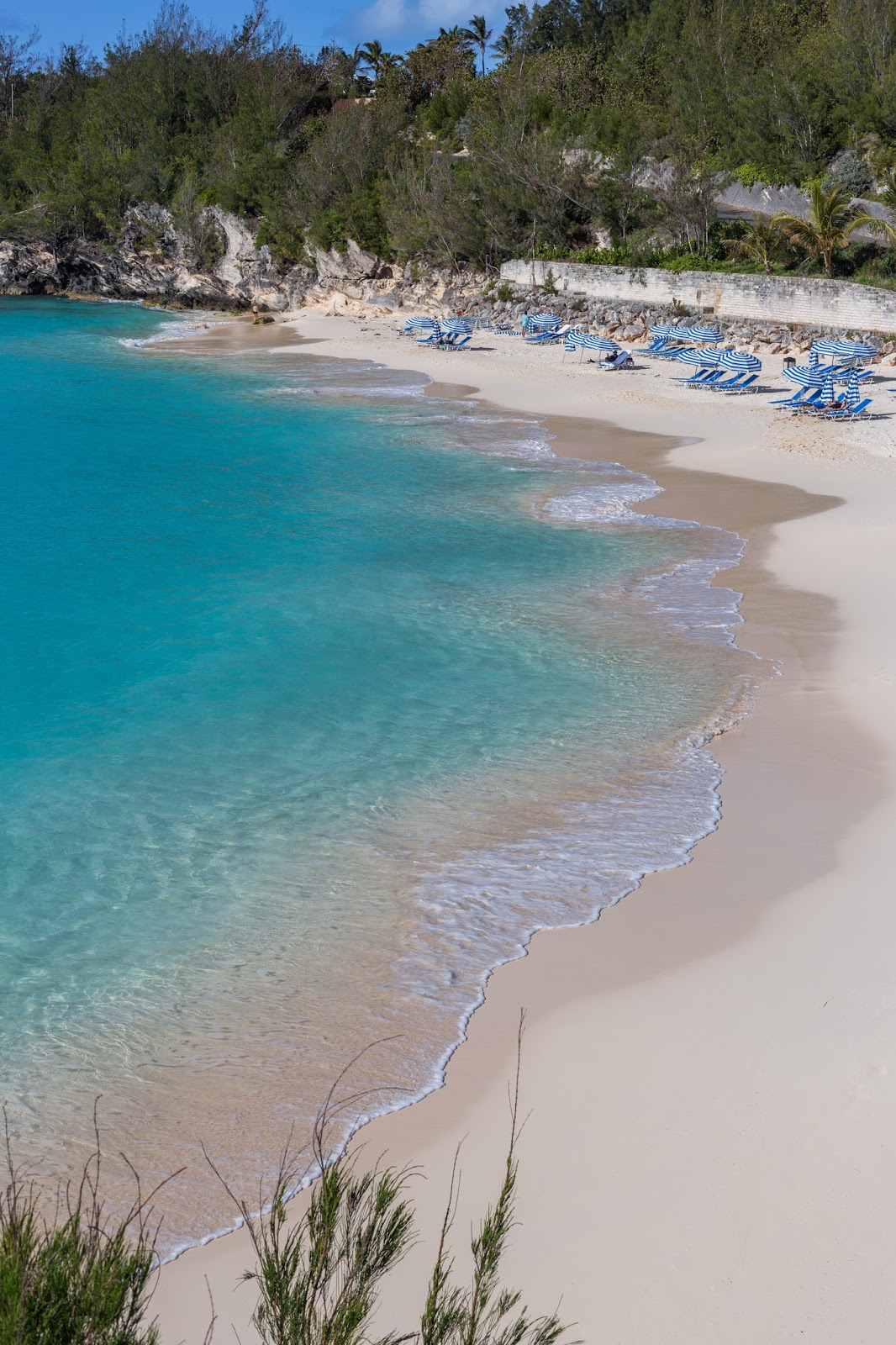 Gibb’s Lighthouse is the oldest cast-iron lighthouse in the world, and is just walking distance from the hotel. We climbed 185 steps to the top, which is 117 ft. tall. It offered an amazing panoramic view of the island! 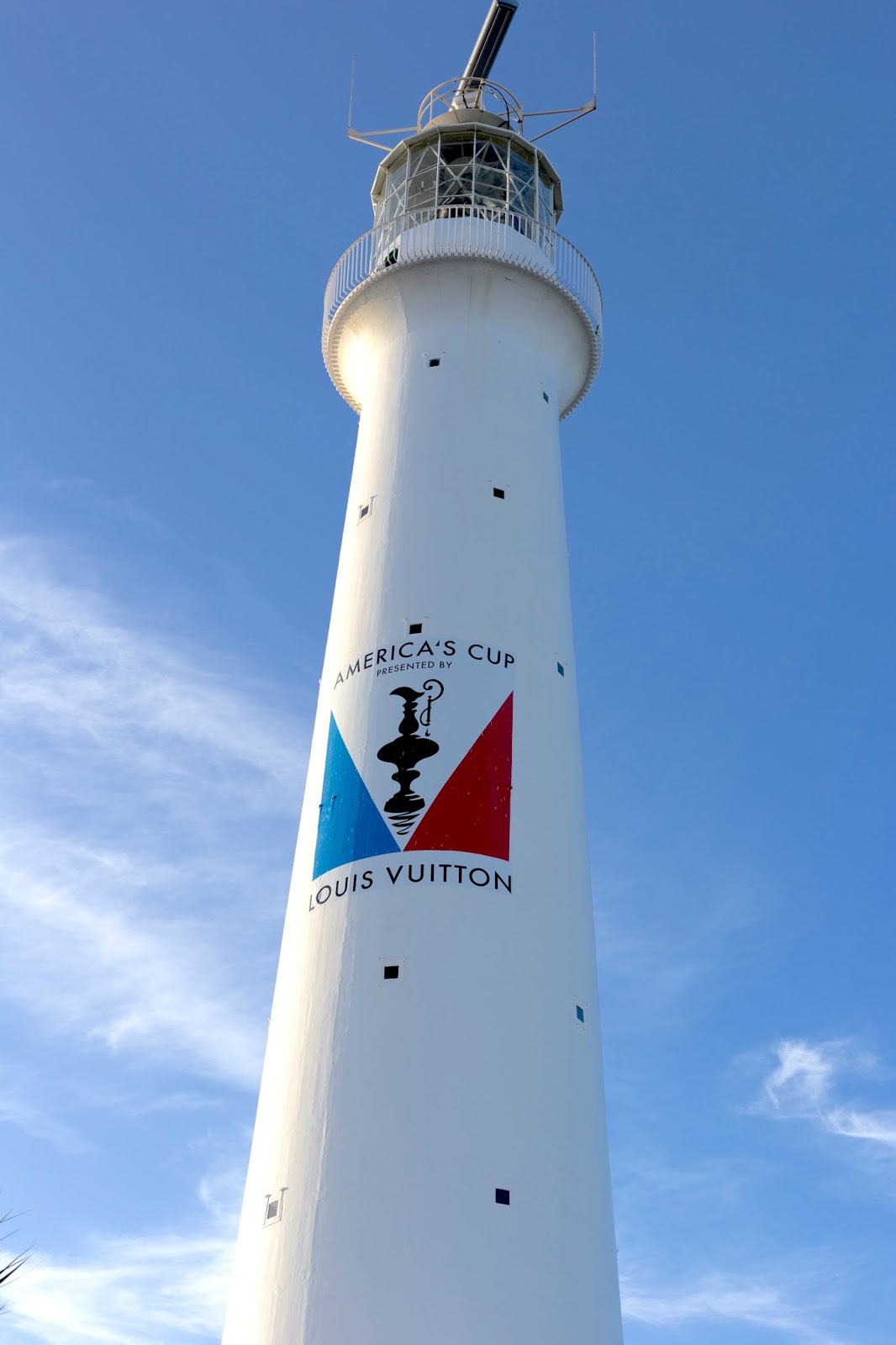 The Royal Naval Dockyard was a total step into history! We rented scooters (more on that in a sec) and took the 20 minute ride to the dockyard, the western most point of the island. It was at one point one of the largest naval bases outside of the UK, and played a strategic role in defense throughout many wars.  Most of the buildings are made with beautiful limestone and have been, or are being, restored. Bermuda is going to be home to the 2017 America’s Cup, and it’s all taking place at the Dockyard, so there was a lot of preparation for that while we were there. 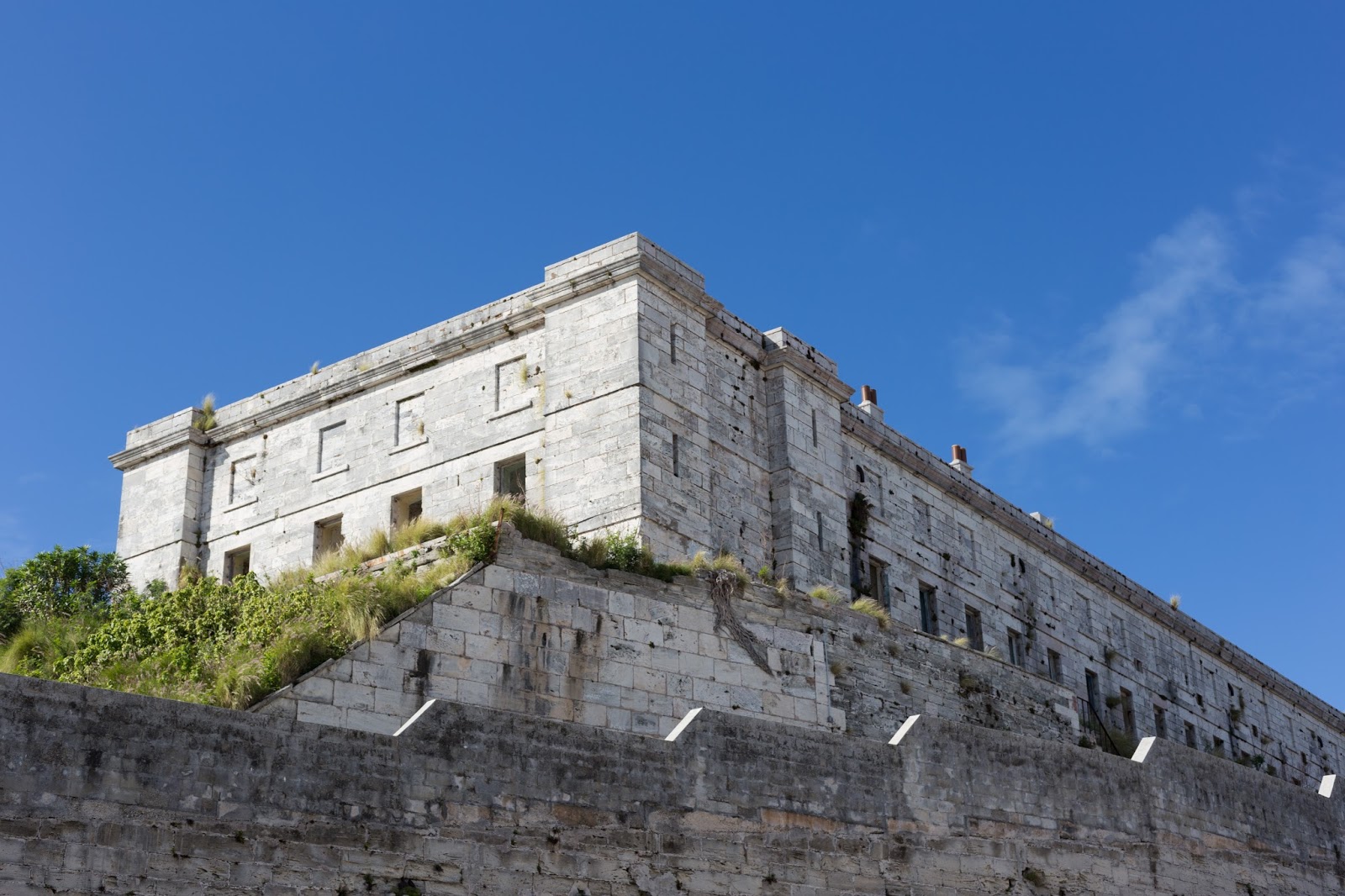 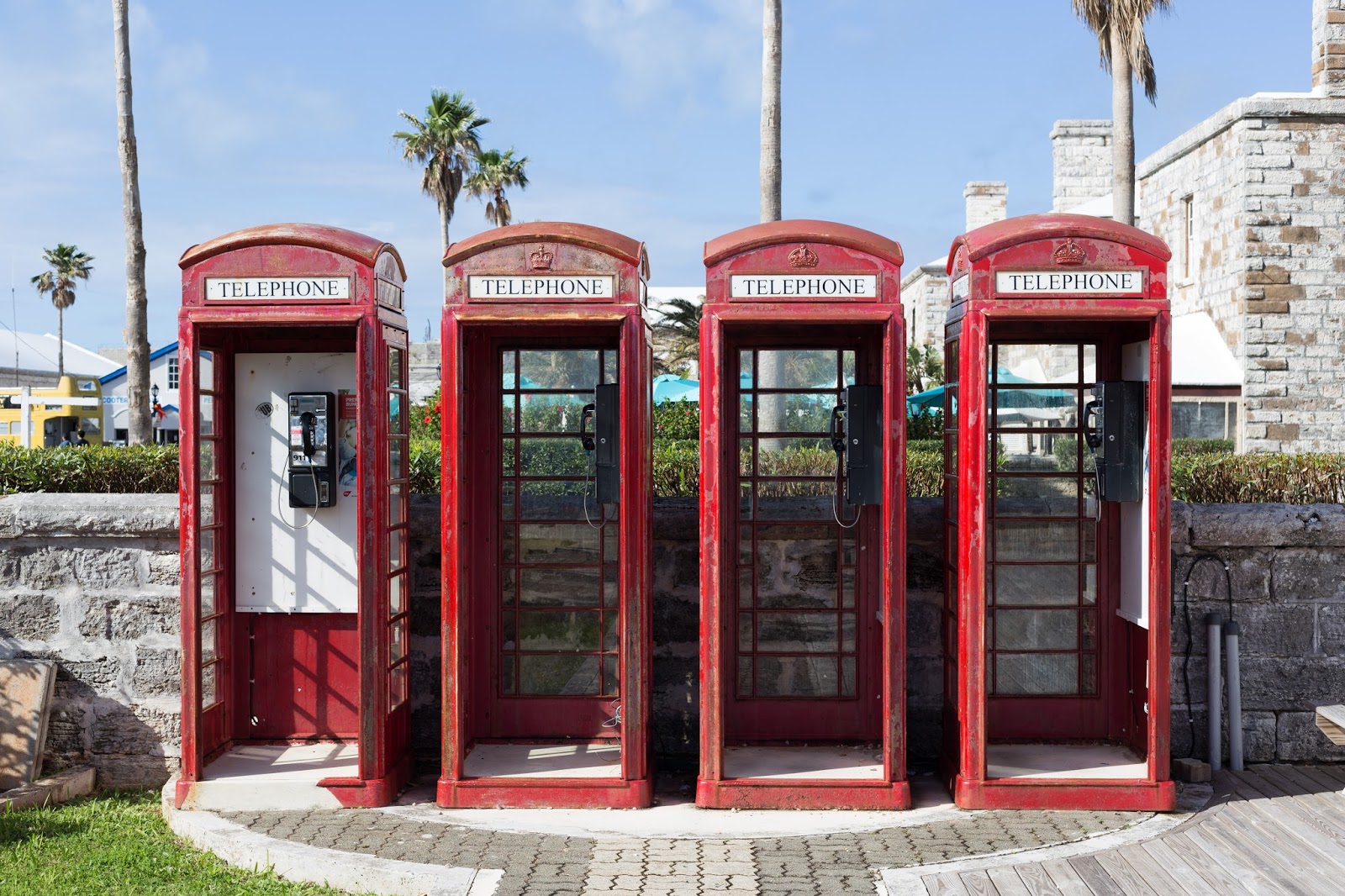 Back to the scooters…this was by far my favorite part of our trip! Tourists are not allowed to drive cars on the island, as that requires a special license, so the only way to get around, outside of shuttle and pricey taxis, is to rent scooters. If there is one thing you do, do this! We rode from the each tip of the island to the other, and it was a blast! It’s a little bit of a long ride, so make sure you plan appropriately, so you have plenty of time to explore each destination.  Our first stop was the dockyard, and we ended up in St. George’s, where we had lunch. 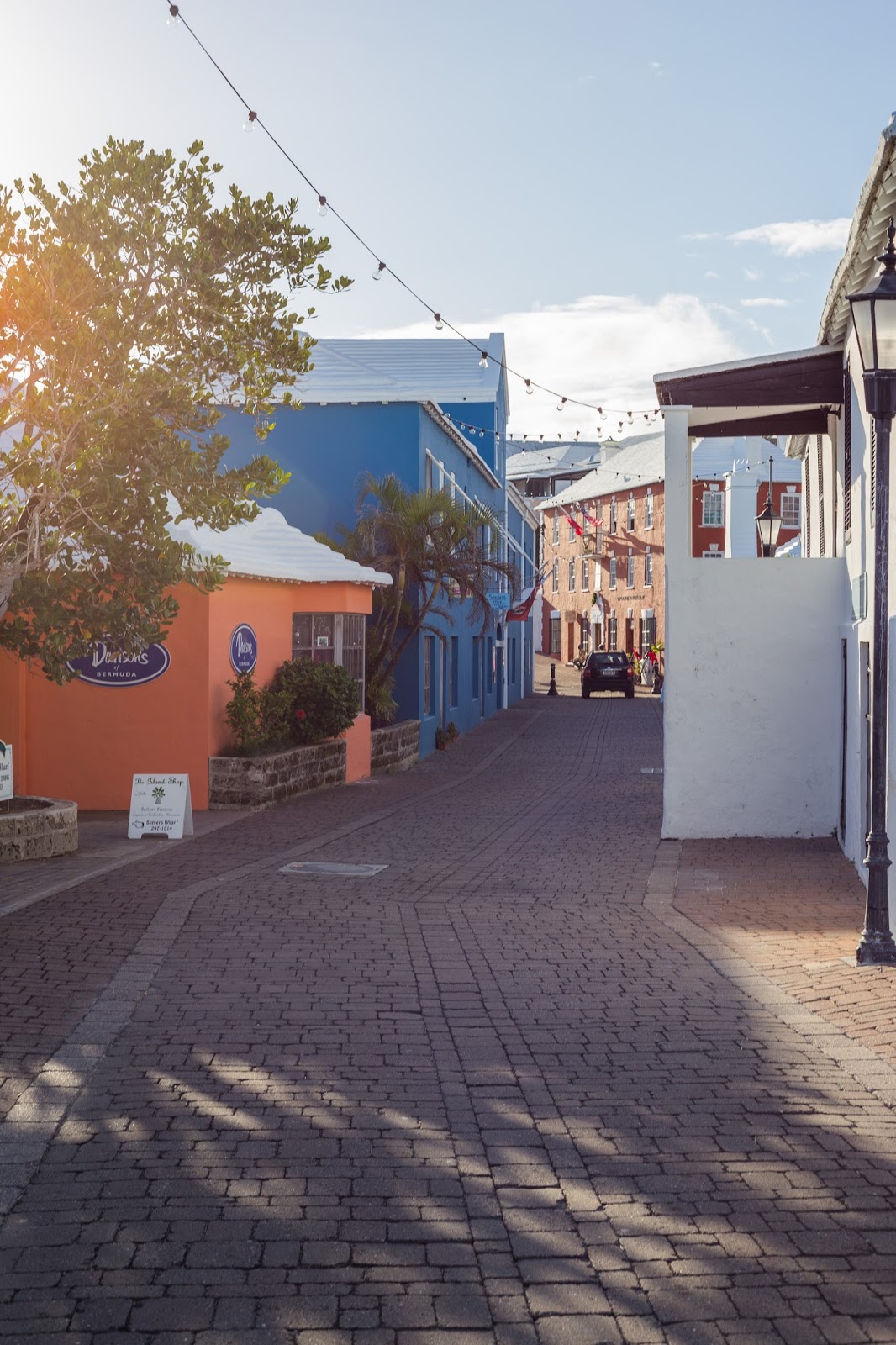 St. George’s is the most charming little town! It was like stepping onto the streets of Notting Hill. We got here a little too late in the day to do much exploring, but there is a lot of rich history in this town, so I would suggest making time for it. 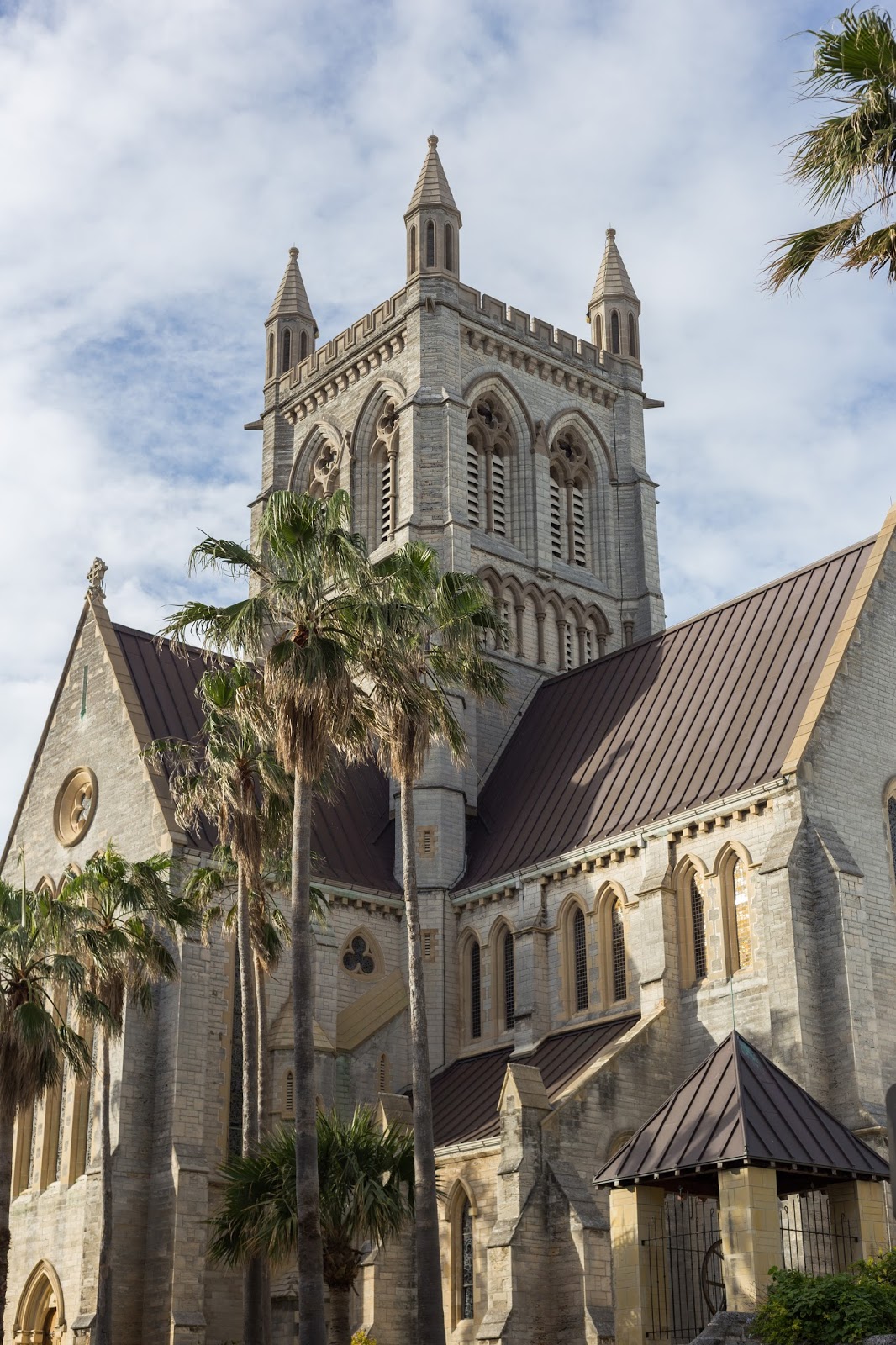 Hamilton is the island’s center and where a lot of the action happens. The Fairmont Southhampton has a ferry that will take you from the hotel to Hamilton. It’s about a 45 minute ride. There is the most beautiful Anglican church in Hamilton, that is worth taking a few minutes to explore.

The Crystal Caves were one of the trip highlights. The caves were discovered by two young boys who were playing cricket and lost their ball. When they went to find it, they discovered this majestic cave. These boys only had a rope to let them down into the cave and a lantern to light their way. Think about how brave that was!! 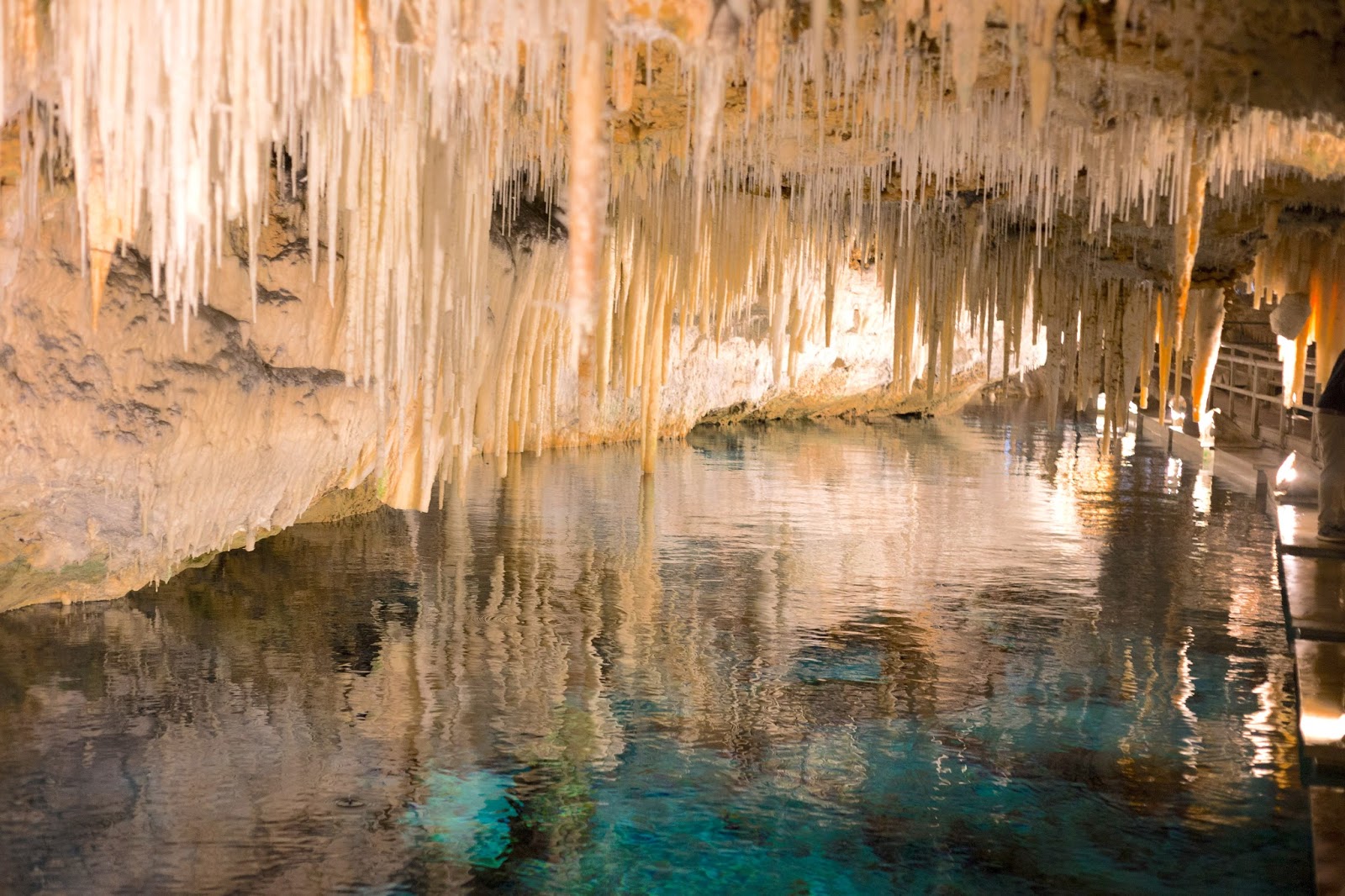 Now, let’s talk where to eat:

Henry VIII – We went here for dinner the first night and had the most amazing rockfish. I mean, when you are on an island, you eat as much fish as possible – am I right? Brandon and I went back on the last day for an easy lunch of caesar salad, and fish ‘n chips.

Swizzle Inn – There are two locations of the Swizzle Inn on the island, which is a local fave. The “Swizzle” is a rum drink made with local Gosling’s rum. It’s a tasty drink, but is super strong, so pace yourself. I wouldn’t know from personal experience, because Brandon drank all mine, but that’s what he said, anyway. 😉 As for food, the nachos and fish ‘n chips were amazing.

Pickled Onion – Located in Hamilton, this was a nice lunch spot fresh off the ferry. I ordered the fish tacos, which I wasn’t a huge fan of, but everyone else loved their dishes.

Ruby Murry – We stopped here for Indian food after our trip to the crystal caves. It’s located in the cutest alleyway in Hamilton, in a quaint and cozy basement. It was one of my favorite Indian food experiences, because of the atmosphere, but the food was equally incredible. 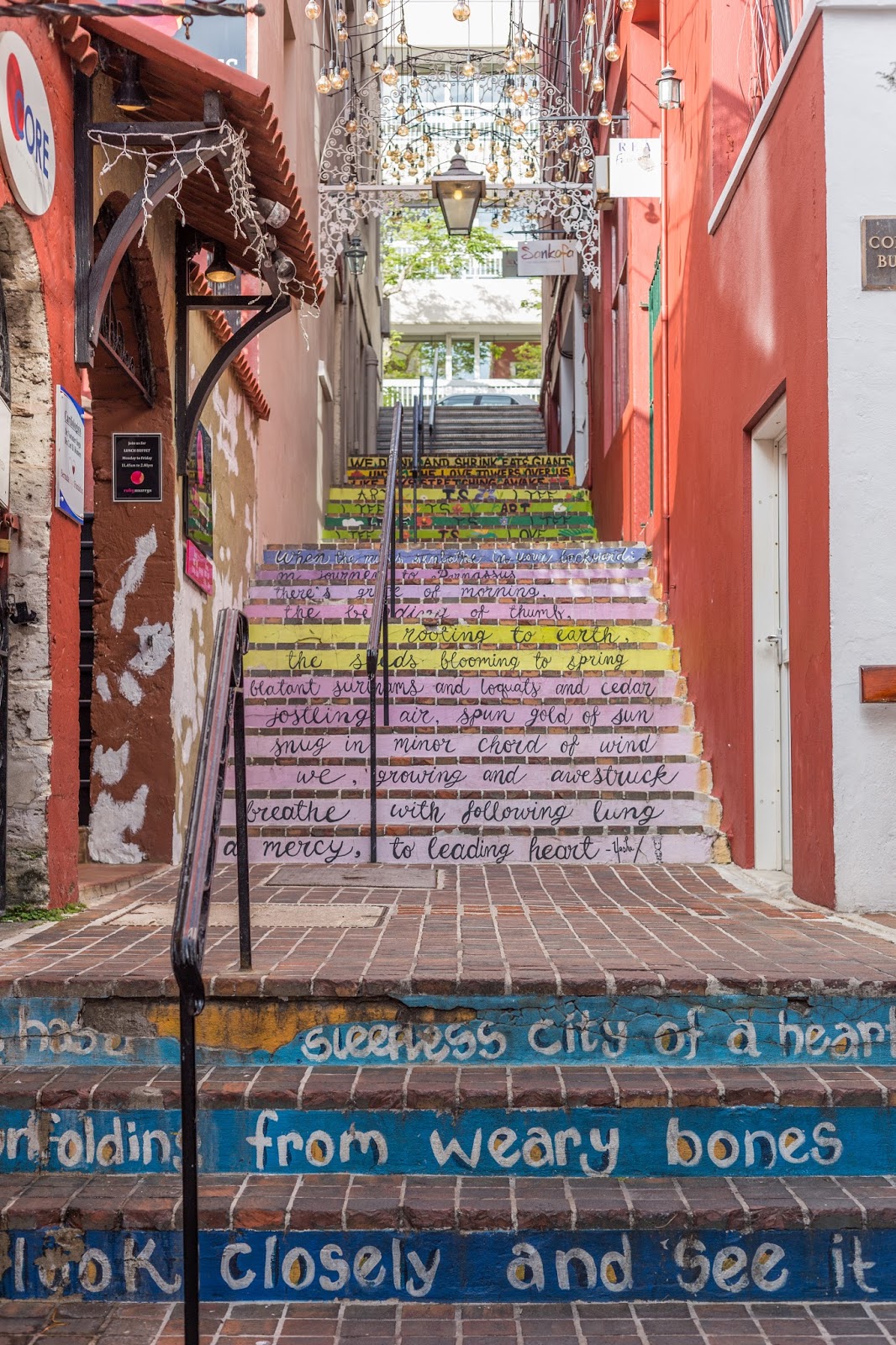 Wahoo’s – We ate here for lunch in St. George, and there was Wahoo-a-plenty on the menu. (And no, this is not the chain “Wahoo’s” that you’re thinking, because everyone has asked me that!) I had the grilled wahoo – which was amazing. I definitely recommend eating here while you are in St. George.

Bacci – This Italian restaurant is part of the Fairmont Southampton, though it’s not located within the hotel. You can take a shuttle down from the hotel, though. The food was OUT OF THIS WORLD. I ordered the special, which was a pesto ravioli, but all the menu items I tasted (off of everyone else’s plate!!) were phenom.

Waterlot – Another subsidiary of the Fairmont, the Waterlot is the place to go for a great steak. Brandon and I ordered surf and turf, and both the filet and the lobster were amazing.

I hope you enjoyed my recap. I adored Bermuda, and am grateful for the opportunity to have visited this unique piece of the world. If you have any specific questions, please post them in the comments below. 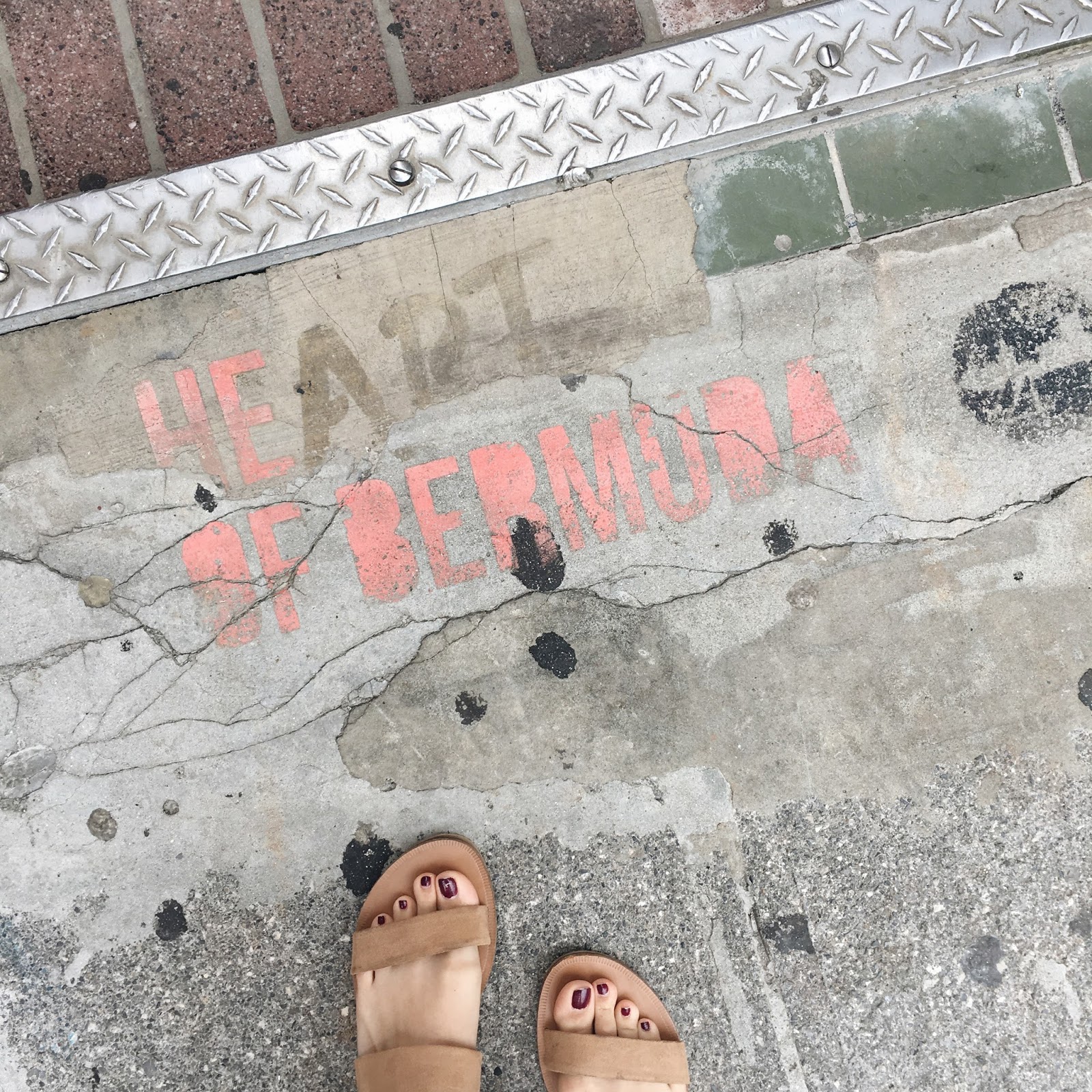