Mid-Century Modern Home Renovation Before and After Photos
After 6 long months of backbreaking work, (followed by 2 months of moving and getting our AirBNB ready!) I’m finally able to share our mid-century modern home renovation before and after photos from #FixerUpBehr. Ahh…so much excitement welling up inside me over this post, you guys.
We still have so much left to do, but the main level is pretty much done and liveable so I snapped a few pics to share with you. The upper level still needs a TON of work, along with random finishing work all throughout the home, such as painting the trim, hanging the doors, drywall repairs, etc…but honestly, we’re taking some time to enjoy the rest of summer and figure we can pick the tools back up when it’s snowy and shitty out.
I’m including the before and afters below so you can get an idea of the transformation. It’s seriously so crazy to look back and see how far we have come. The first time I looked at these before and afters I cried. There’s been true blood, sweat and tears poured into this home and it’s like…we did it….we really did it!
Remember my vision post? It’s funny to look back and see how the vision has slightly changed along the way. And I love the changes! We originally set out to do a “modern farmhouse” but quickly realized we wanted to go the mid-century route, as it’s our favorite design style and we just kept gravitating towards that.
We did hire contractors for a lot of the work, but Brandon and I did A LOT of the work ourselves, too. And we honestly couldn’t have done this without the help of my dad and his friend Pat, who were here working on the house almost everyday – even when we were at work. We also designed everything ourselves, with the help of endless hours spent on Pinterest.
Ok guys, enough chat… let’s see the before and after pictures. I linked everything I could after each photo. Also, if you like them, please feel free to pin them for inspo later. I’ll be doing more in depth room by room posts soon, so if you have questions, be sure to drop them in the comments below!
Mid-Century Modern Home Renovation Before and After Photos 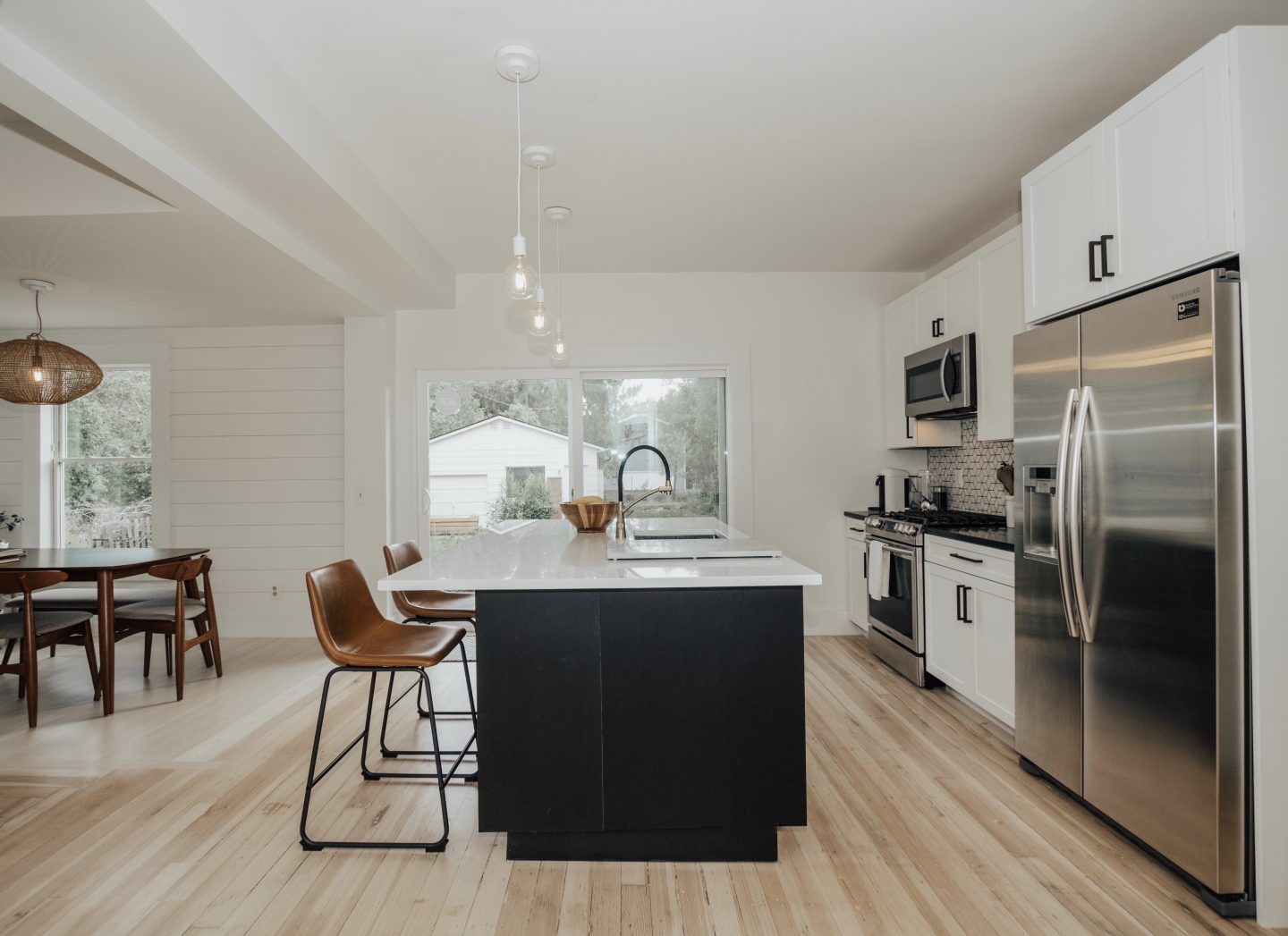 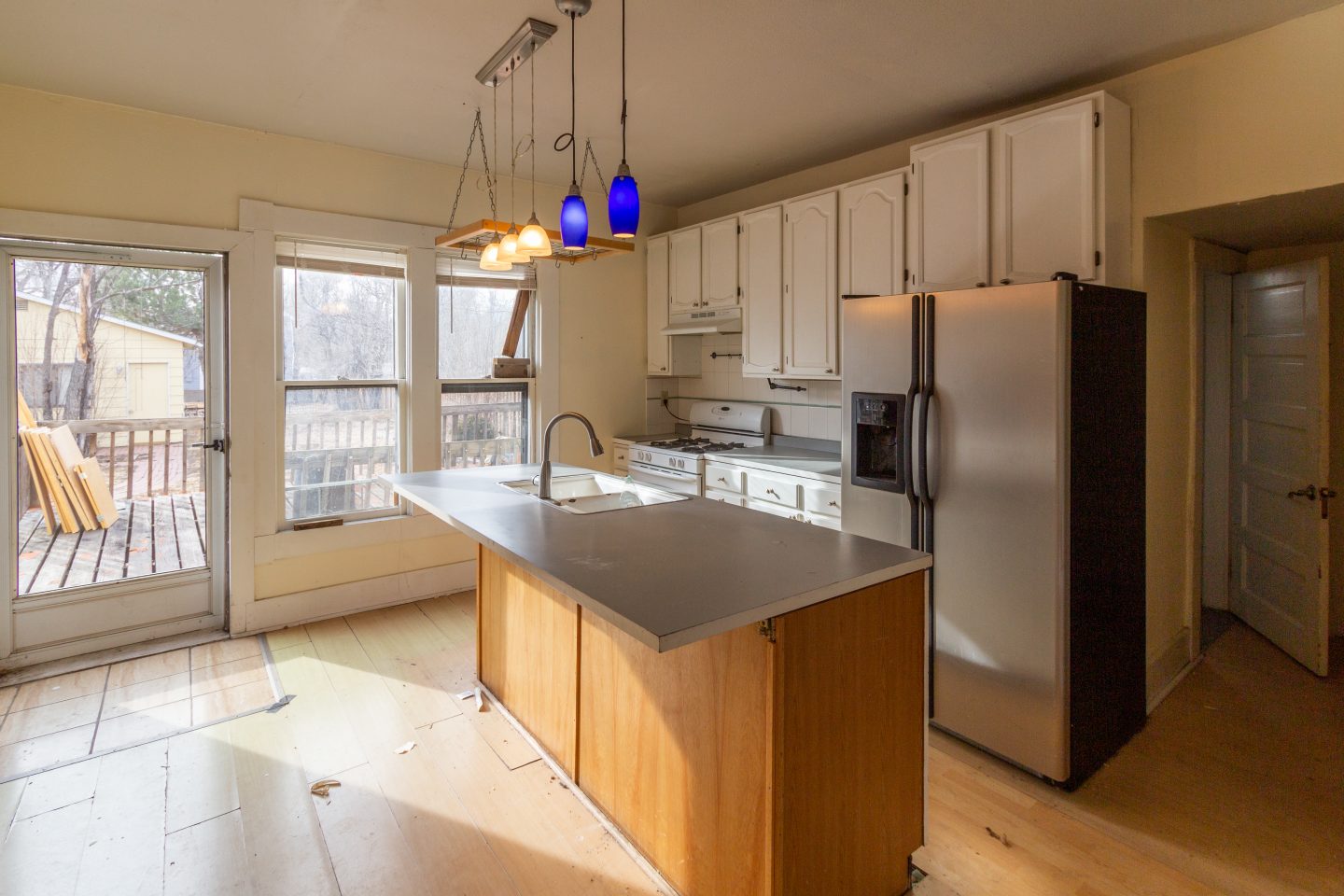 Kitchen After: Besides completely gutting the kitchen and remodeling it with a mid-century design, one of my favorite, more subtle, changes is where we added the big glass slider in lieu of the old backdoor and two windows. SUCH an improvement. This was not in the original plan, but as we were standing in the kitchen one day, trying to figure out how big we could get away with making the island, it dawned on me that we should do the slider and it was SUCH a good decision! (Let’s just ignore the crappy backyard you can see through the slider. We’ll get to that later….) 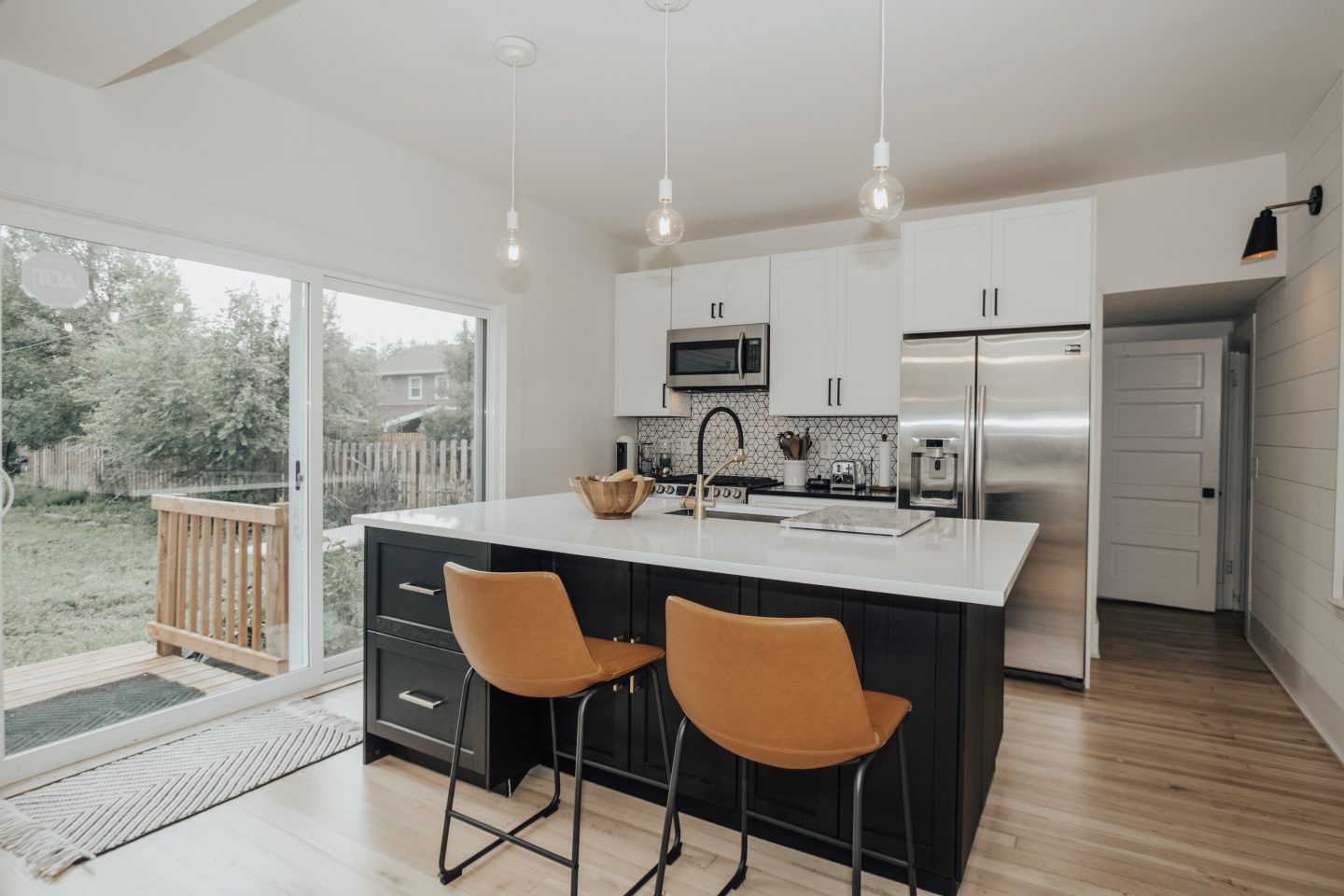 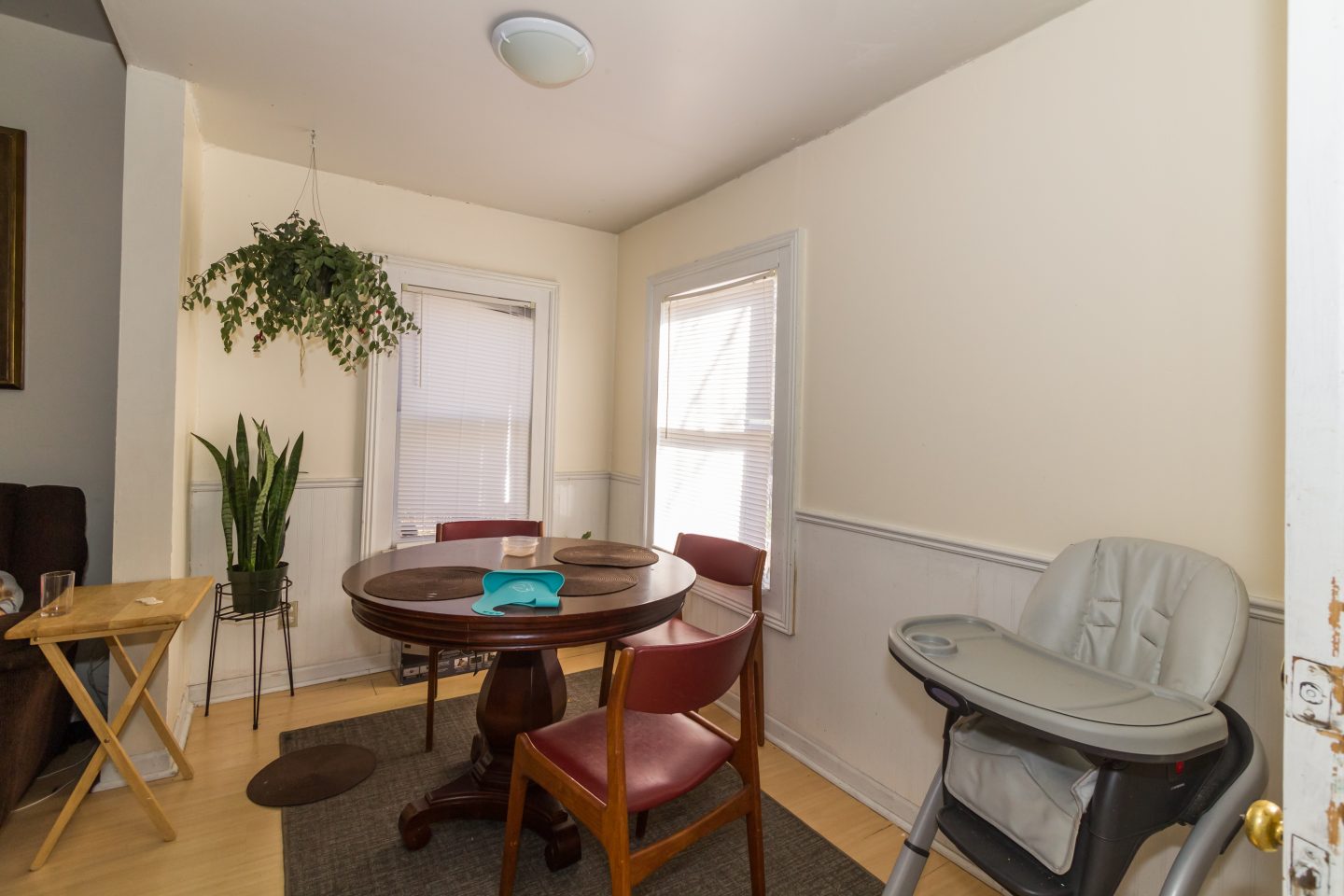 Dining Room After:
My favorite part of this dining room (besides the dope light fixture, that’s sadly sold out everywhere) is the shiplap feature wall. It was such an inexpensive addition and really add so much to the space. Also, I love that Brandon replaced these wood windows himself. This room is an add on from the original house (it was already here by the time we bought it) but because of that, the floors were not original and we had to add wood flooring here. We tried to match the grain of the 100 year old wood floors, and went with a douglas fir to match. Sadly, they turned out to be super red in nature and when we stained them white, they were pretty much pink. We ended up pretty much bleaching this section of flooring to get the redness out, and then white washed it. Because of that, this area is a lot whiter than the rest of the main level, but it kind of defines the space so we can live with it. 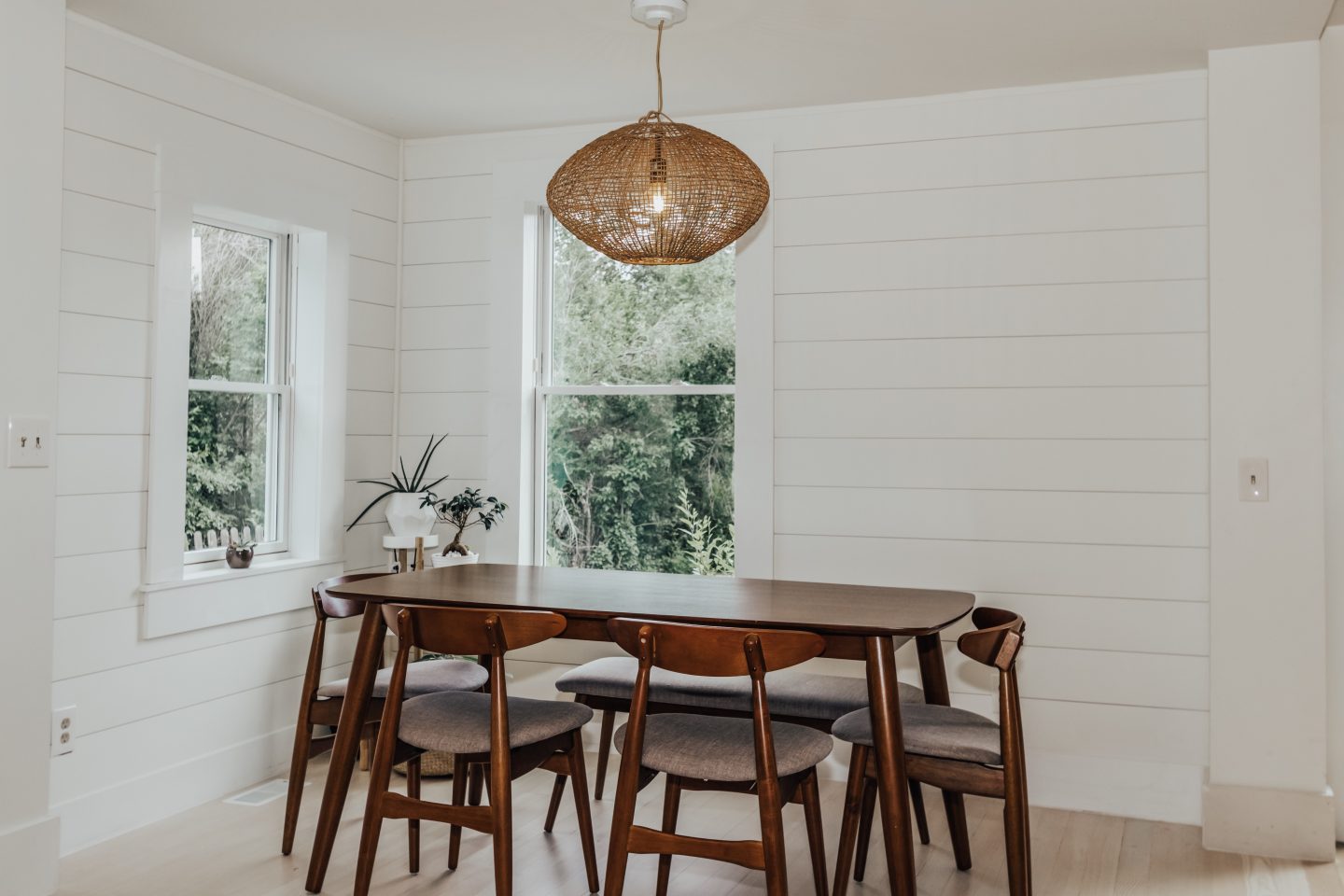 Living Room Before:
So I’m just realizing I didn’t take very good “before” pictures of the main level. Ha. We had so many details going on, I actually didn’t even realize I hadn’t until we were already well into demo. Below are some photos we happened to snap when we were at the house when the former tenants were still living there, hence the TV being on. 😉 Besides obvious design changes, another huge change to this space is that we removed this center console wall to open up the space between the living room and kitchen. Behind those walls though, was a 100+ year old brick chimney that ran the length of the house up to the ceiling. For some tragic reason, someone previously lathered cement around the brick so it was not salvageable as a design feature, so we took the whole thing down. Talk about a job! In the end, we still had to have a small wall installed back here, so that the HVAC venting could run through it. (It was literally the only place it could go to reach the upper rooms…ugh!) It looks like, but it was a bummer that we couldn’t leave it all open. 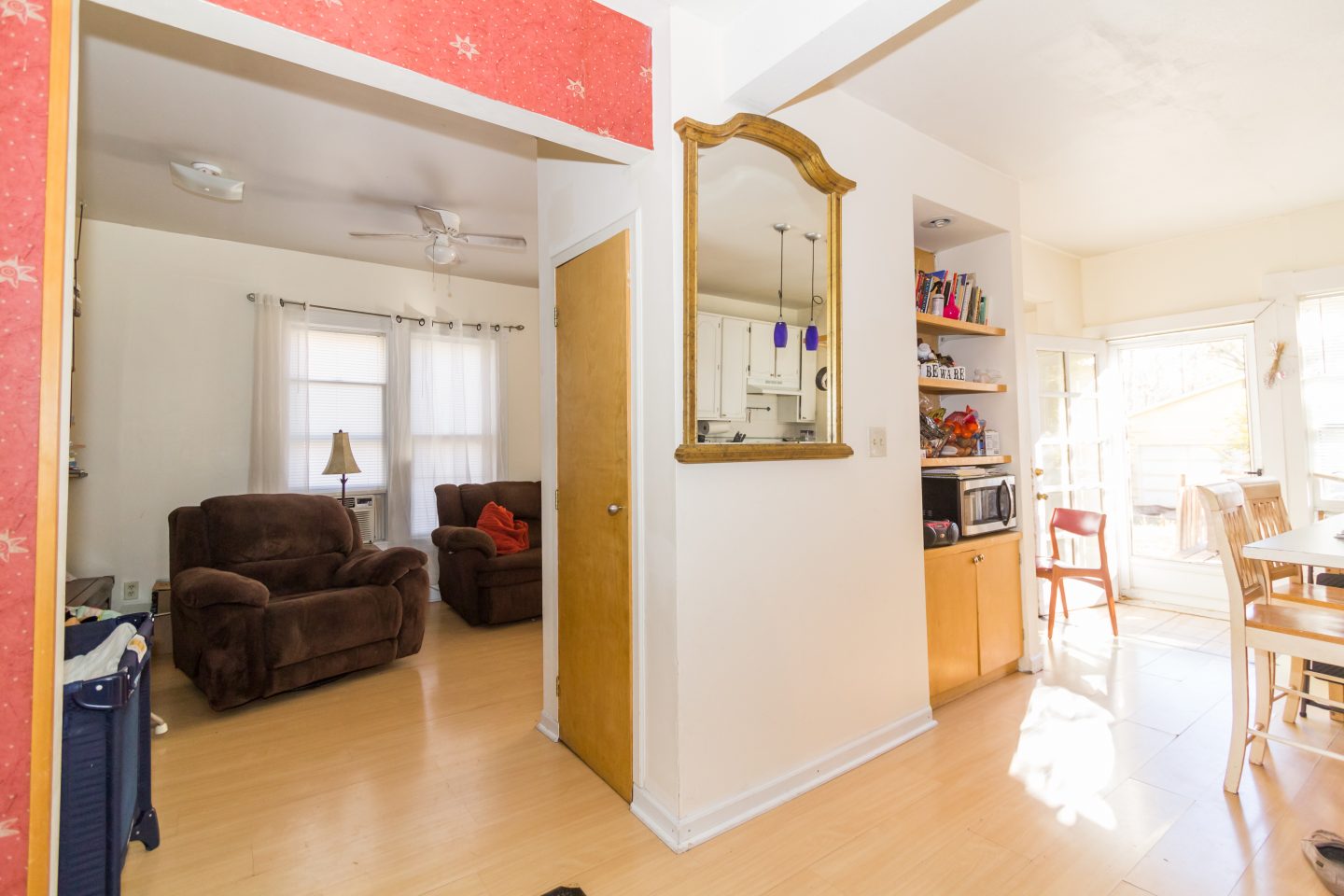 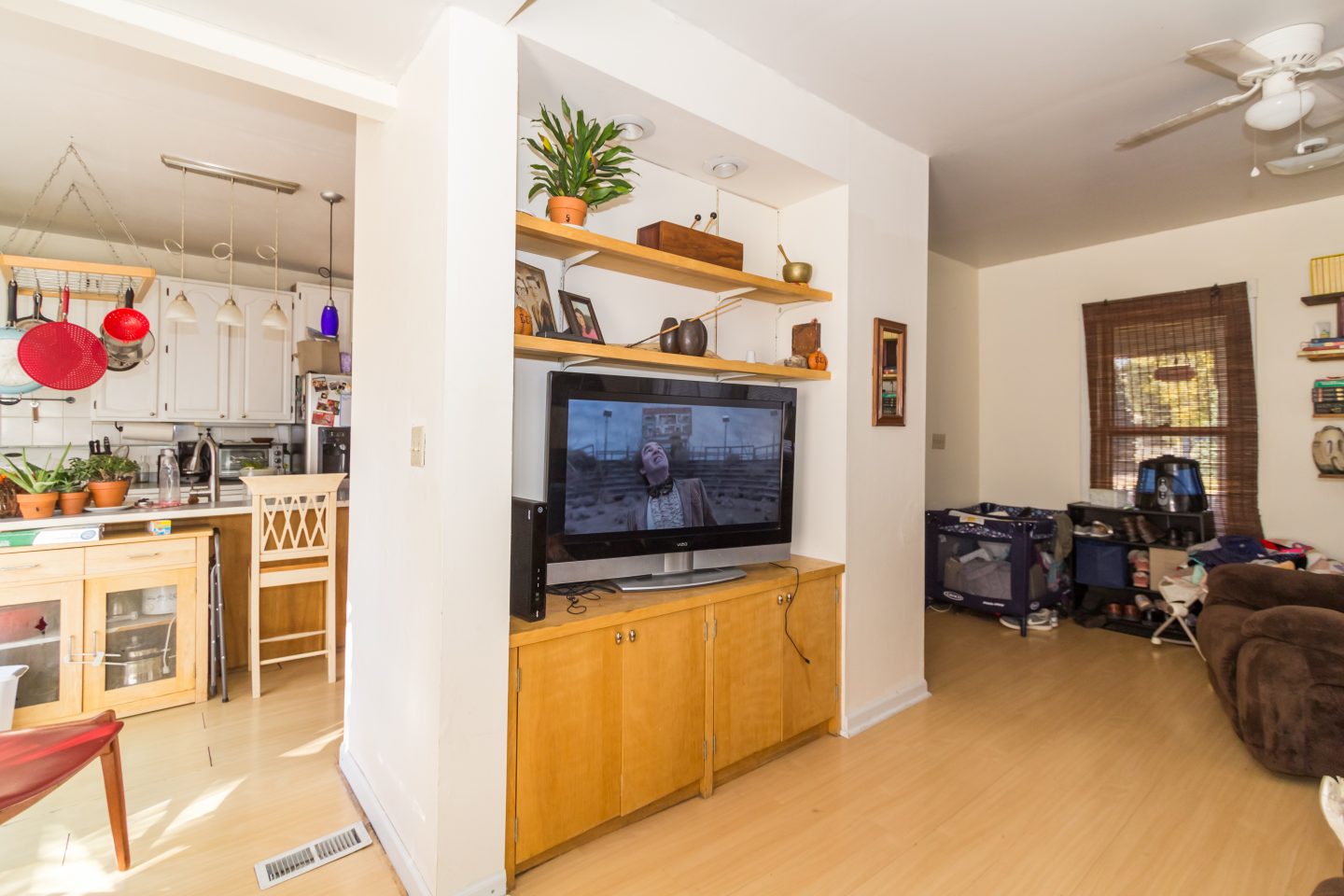 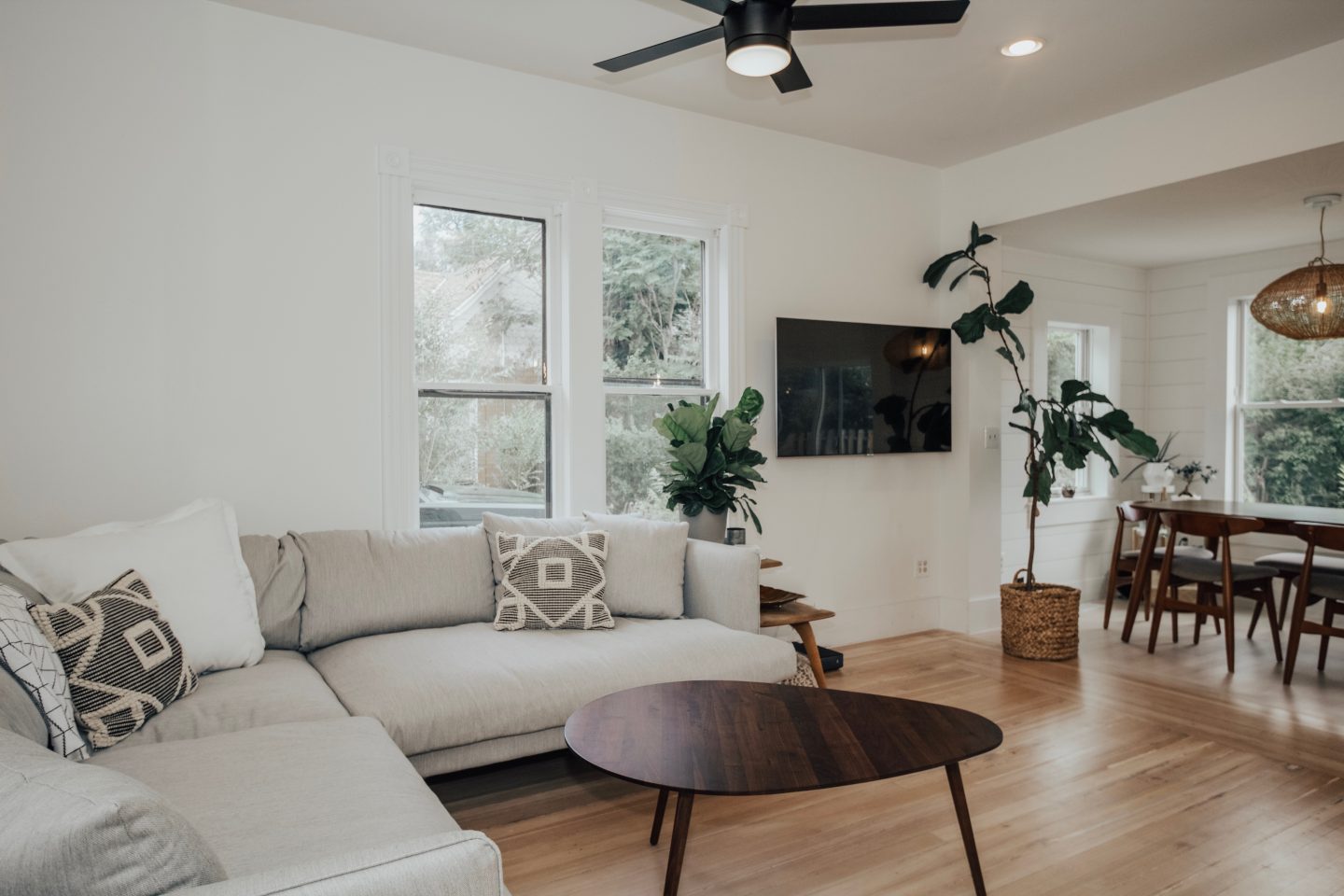 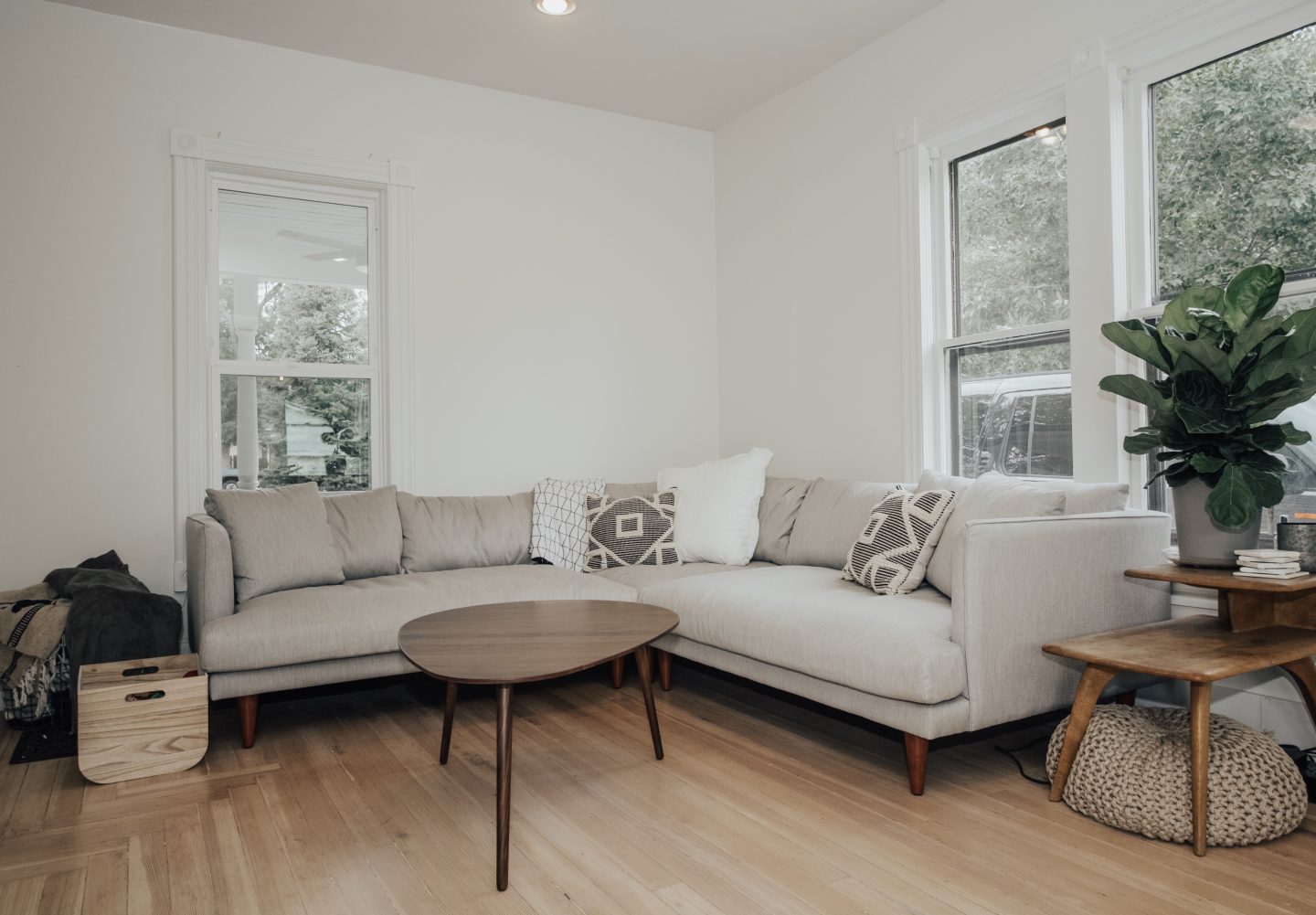 Hall/Staircase Before:
This is one of my favorite changes in the home. Shiplap honestly makes SUCH a huge difference and is really not an expensive thing to do. I think we spent like $300 total on the shiplap and then installed it ourselves pretty easily. (I linked the exact shiplap we used below. It came primed and was easy to install.) Brandon also redid the entire staircase by himself, taking out the old carpet and wood and installing the new wood planks. Who knew this guy was so handy?! 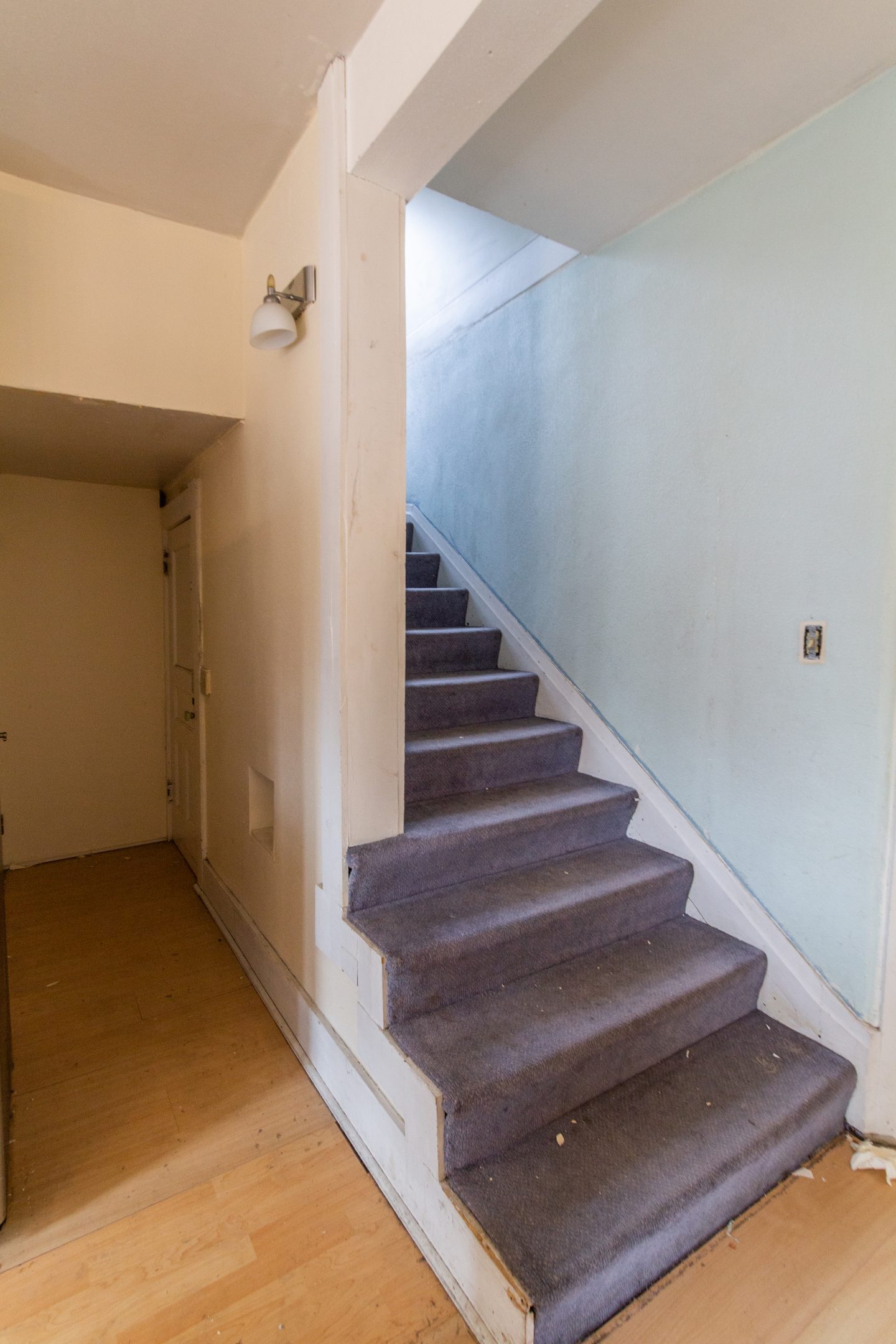 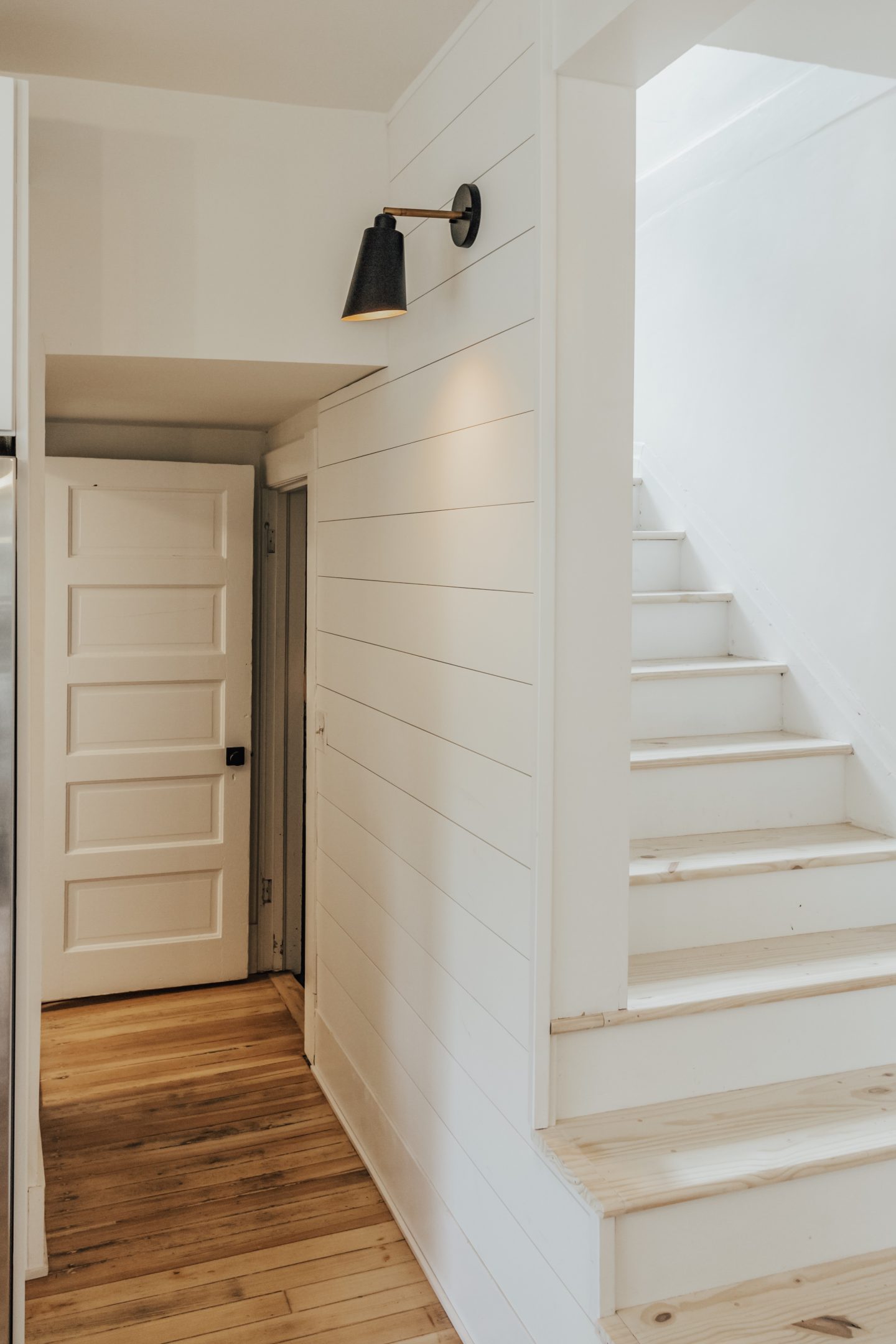 Main Level Bathroom Before:
Again, I started snapping these photos after we had already started renovation and tearing down wallpaper, but even then, you still get a good idea of the transformation. 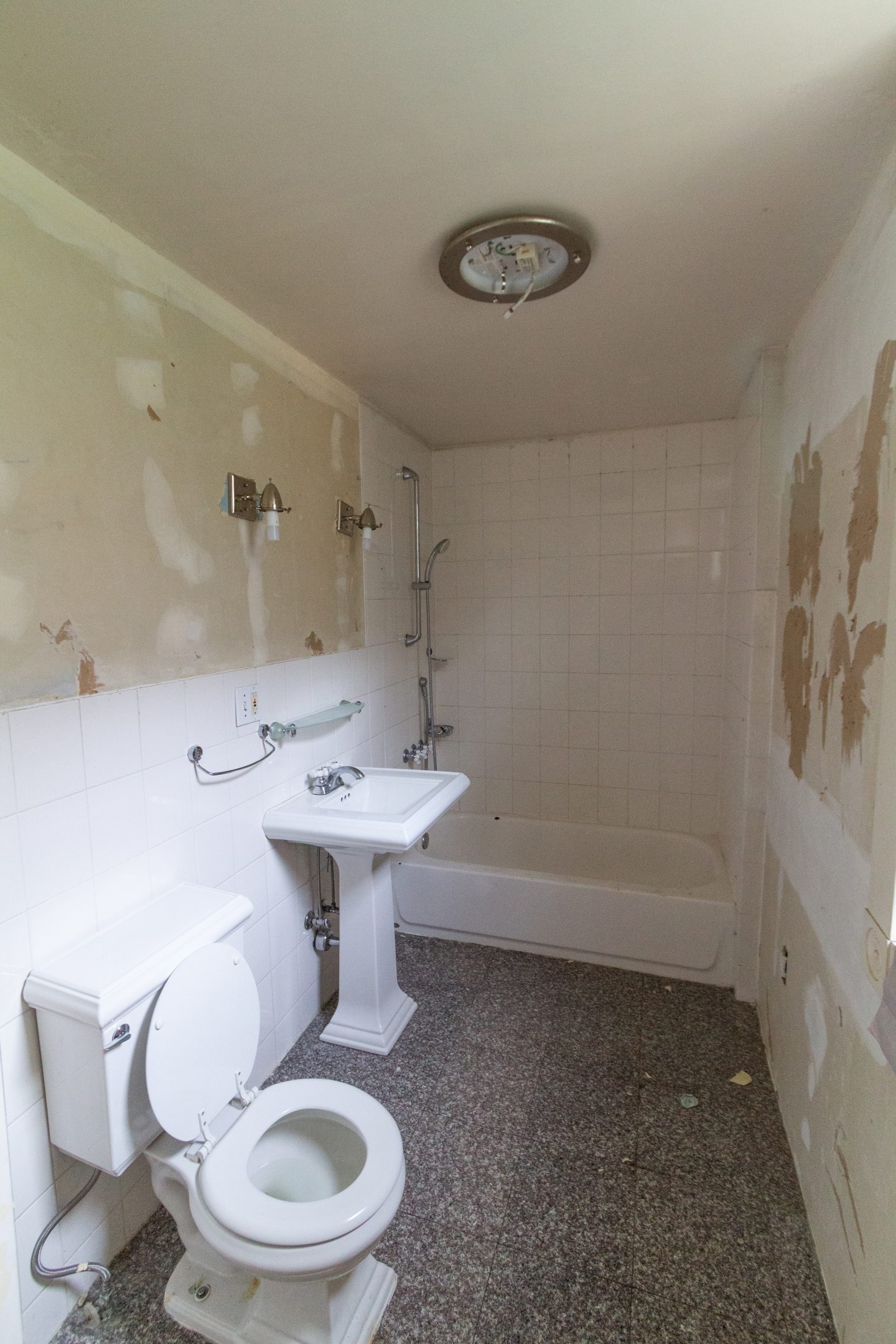 Main Level Bathroom After:
I couldn’t be more obsessed with how this bathroom turned out. We were wanting something a little more modern and unique than subway tile, so we decided to do longer tiles and run them vertically. It makes such a clean and modern touch! We also went with a real cast iron tub, because they are timeless and frankly worth it. 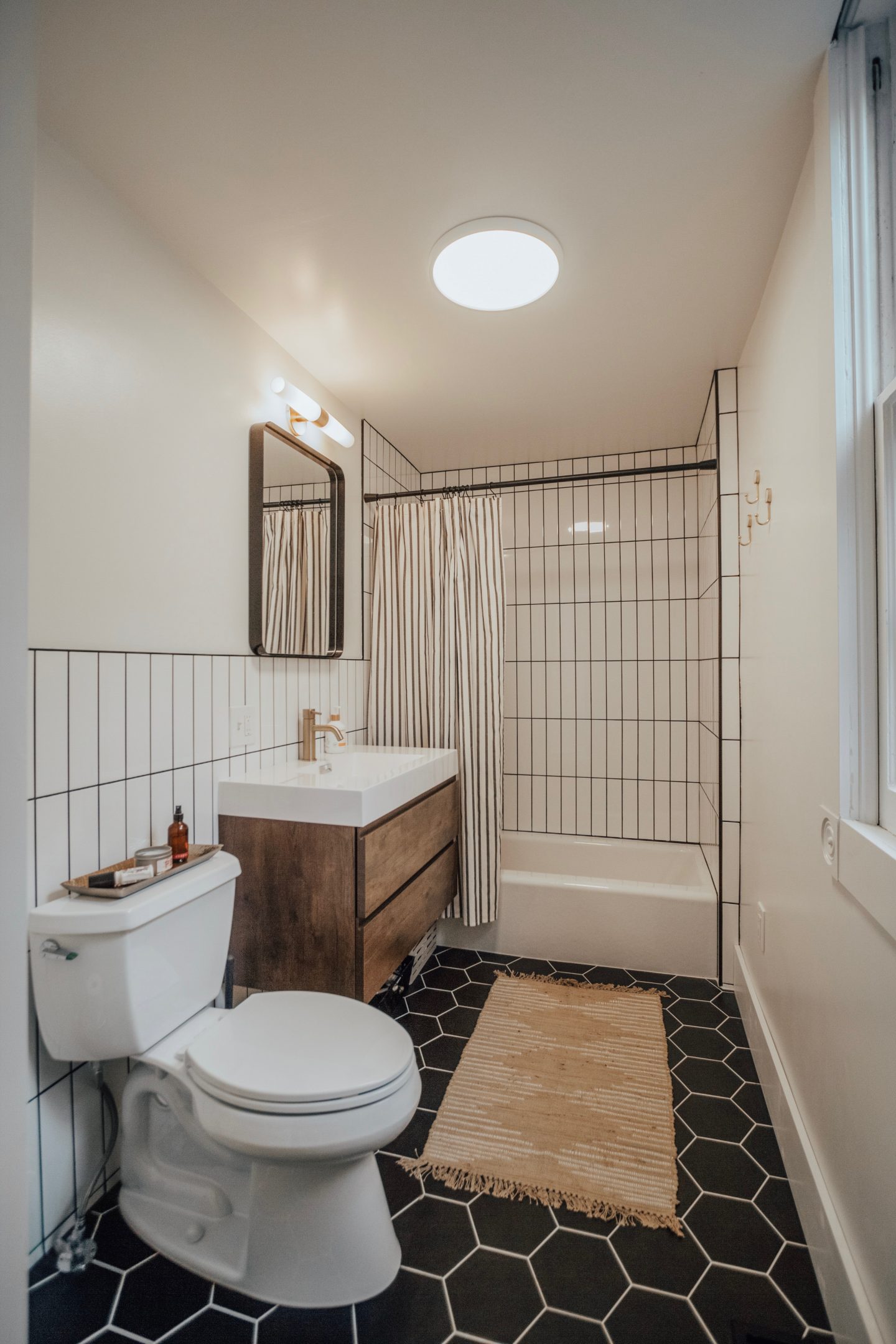 Hope you guys love our home as much as we do! Let me know if you have any questions in the comments below!